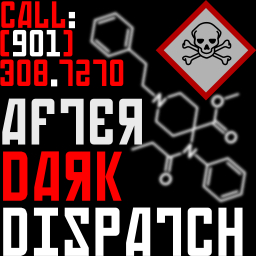 CALL CALL CALL 901-308-7270!!! Call in and leave a voicemail! OR you can join the chat via Zeronode IRC! Just join #ozarksafterdark @ irc.zeronode.net! OR: join the Sphinx.chat tribe @ HERE! Help produce the show via Podcasting 2.0, BAT (Brave browser), or gaypal, cryptos, etc., send notes/txid's to v4v@ozarksafterdark.com & you will be credited on the show! <3

Just in time for HALLOWEEN, a prophecy is fulfilled!

That's riiiiight! ACTUAL CHEMICAL WEAPONS have been seized from black market drug dealers in California, and no one seems to have noticed! This isn't some asshole with a gelcap full of ricin - the fuzz claim to have seized enough to kill FIFTY MILLION people. Hyperbole? We do the math on it - and it might actually be MUCH more impressive.

If you thought fentanyl was scary, put on your gloves & gas mask & unholster your naltrexone, this shit's going to be wild!

Forbes shills "biosynthetic psilocybin"! Great idea, and only a few millennia late to the party!

Some positive (off-the-charts, miraculously positive) LSD stories (for once!)!!!!

OH - and one of USA's star creepy defense contractors has been awarded almost a billion dollars to build "homes" in lunar orbit. DEFINITELY nothing to see there..

Monarch butterflies are being wiped out. These combat veterans are trying to save them. [archived]

What happens when you take 550 doses of LSD? Well… [archived]

If you like the music featured in the show I can't emphasize enough how important it is to support the artists who poured their time and talent (and treasure) into their craft; the majority of the tracks listed above are available for purchase by following the links provided. Tossing these amazing people a couple bucks makes you a part of an amazing feedback loop. When we all participate we all pull out more than we put in. ZERO-POINT CULTURE FTW

If you make a donation and wish to have a note read on the show send yer note to v4v@ozarksafterdark.com along with your transaction ID or some other way of identifying your donation AND how you would like to be credited. I'm not trynna doxx anyone who isn't trynna get doxxed1 ;)